NORTH CANTON, Ohio, Feb. 9, 2017 /PRNewswire/ -- The Timken Company (NYSE: TKR; www.timken.com), a global leader in bearings and mechanical power transmission products, awarded college scholarships to 17 sons and daughters of Timken associates in 11 locations around the world today. Valued at up to $540,000 over a four-year period, these scholarships are funded by The Timken Company Charitable and Educational Fund, Inc. The program has awarded more than $23 million in scholarships since its inception in 1958. 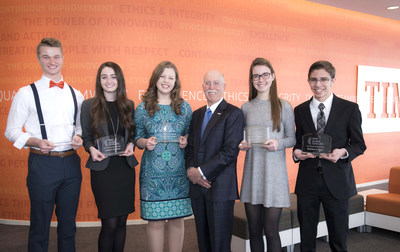 Chairman John M. Timken, Jr. hosted the recognition event for students and their families at The Timken Company World Headquarters in North Canton, Ohio. Local scholarship finalists attended the event in person, while other finalists and their parents joined via global webcast. "Each of these students have demonstrated their intellectual capability, personal drive and commitment needed to make a powerful, positive difference," said Timken. "The Timken Global Scholars program encourages these young people to explore new opportunities and share their talents with the world."

The $35,000 Henry Timken Scholar Award recognizes the top-ranked applicant and is renewable for up to three additional years for a total of $140,000. This year's Henry Timken Scholar is Benjamin Koester, the son of John Koester, manager of global rail quality at the company's plant in Mascot, Tenn. Ben, a senior who has been home-schooled, will study chemical engineering at the University of Tennessee. Upon graduation, Ben plans to go to medical school after which he hopes to become a rural physician.

The $25,000 Jack Timken Scholar Award was presented to Nikhila Simhadri, the daughter of Laxmi Manohar Simhadri, group leader in the company's technology center in Bangalore, India. The award is renewable for up to three additional years for a total of $100,000. After graduating from Jnana Sweekar Pre University College in Bangalore, India, Nikhila plans to pursue her bachelor of medicine in All India Medical Institute of Medical Sciences. Nikhila aspires to receive her master's degree from Harvard University, and her ultimate goal is to become an oncologist.

Five students received $10,000 scholarships, renewable for up to three additional years, for a total value of $40,000 each.

The Timken Company (NYSE: TKR; www.timken.com) engineers, manufactures and markets bearings, gear drives, belts, chain, couplings, and related products, and offers a spectrum of powertrain rebuild and repair services. The leading authority on tapered roller bearings, Timken today applies its deep knowledge of metallurgy, tribology and mechanical power transmission across a variety of bearings and related systems to improve reliability and efficiency of machinery and equipment all around the world. The company's growing product and services portfolio features many strong industrial brands including Timken®,  Fafnir®, Philadelphia Gear®, Carlisle®, Drives®, Lovejoy® and Interlube™. Known for its quality products and collaborative technical sales model, Timken posted $2.7 billion in sales in 2016. With more than 14,000 employees operating from 28 countries, Timken makes the world more productive and keeps industry in motion.